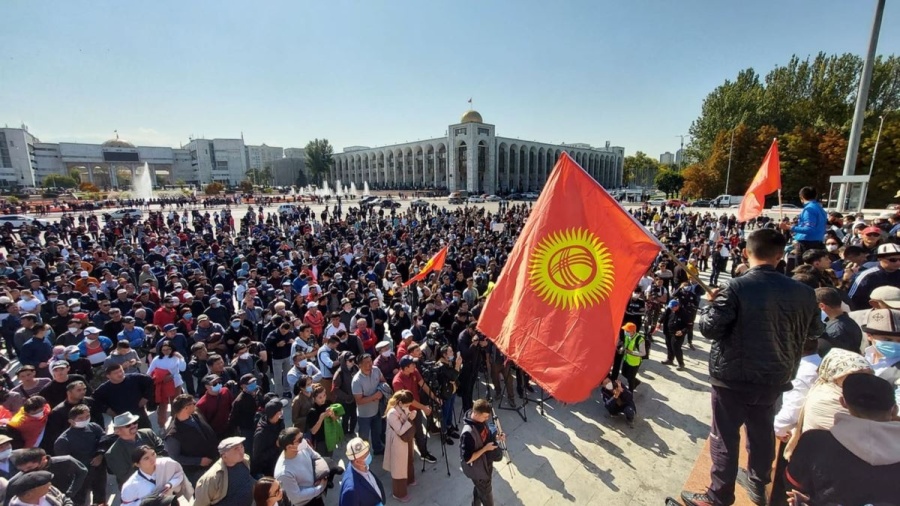 The last twelve months have been characterised by large waves of protests, upheavals, demonstrations, and movements. Taken together,  a variety of social groups and forces challenged the status quo of specific structures and social patterns to achieve change and emancipation. This has spanned across the whole world, from the Black Lives Matter in the US to pro-democracy movements in Hong Kong, from the political protests in Belarus to anti-government demonstrations in Lebanon to name only a few examples.

Kyrgyzstan has often been referred to as Central Asia’s ‘island of democracy’ due to its considerably more open and competitive political system when compared to a region where authoritarianism is the modal form of regime as well as its  vibrant media and active civil society. This post-Soviet Central Asian republic offers a very interesting vantage point to reflect on the concept of ‘voice’, and expressions of the many interests and issues of its 6.5m inhabitants. According to economic sociologist Albert O. Hirschman, voice is defined as an ’attempt […]  to change, rather than to escape from, objectionable state of affairs’.1 Thus, voice entails an attempt by the members of an organization – which can be a state – to change the circumstances based on their dissatisfaction with the provider’s decreasing performance. In the Kyrgyzstani context reasons for such dissatisfaction were plenty in 2020. These included widespread corruption; constant personal and political feuds; business-politics cronyism and patronage. This was on top of long-term and deep economic grievances as well as more proximate disgruntlement with the authorities’ ineptitude in dealing with the Covid-19 pandemic.

Here we focus on two starkly different examples of ‘voice’ that have taken place in Kyrgyzstan in 2020. Firstly, the powerful and consequential deployment of strong social media campaigns which have brought to power Sadyr Japarov. Secondly, his brand of populism and nationalism, and civic groups, which shed light on the resilience of Kyrgyzstani citizenry.

Revolution amidst a pandemic2

Kyrgyzstan’s relative openness of civil society and ‘permeability’ of politics has often served as a conduit for convenient and lucrative ties between officials and private partners, also from criminal and illegal backgrounds. This resulted in the state often being exploited for personal purposes, as opposed to providing services and enhancing human development for its citizens. The extent of corruption and politics-business nexus in Kyrgyzstan was exposed in 2020 in international reports and investigations into off-shore accounts and money-laundering schemes.3 To recall, these events unfolded against the backdrop of the Covid-19 pandemic crisis4  and longer-term socio-economic challenges.

Popular dissatisfaction and elite in-fighting all came to a climax in October, during and after the 4 October 2020 parliamentary elections. Widespread reports of irregularities and frauds during the campaign led to mass protests in the capital city Bishkek and across the country. Very quickly, the elections were annulled by the Central Election Commission, politicians freed from jail by their supporters and the sitting president Sooronbay Jeenbekov forced to resign. Within the space of ten days, a power grab had taken place. Sadyr Japarov, till then a relatively minor political figure serving an 11-year sentence in jail on charges of kidnapping seized power thanks to the key support of nationalist and populist allies in the political arena, powerful economic support from some business groups, and crowds willing to use violence to seize power.

An interesting aspect in the story of Japarov’s rise is that social media played a predominant part in the unfolding of the situation.5 Amid the post-election chaos in Kyrgyzstan in October 2020, Kyrgyz-language social media was increasingly filled with support for Japarov. More than 158,500 thousand people subscribed to Sadyr Japarov’s Facebook group after the events of October 2020. At least 40,000 users are registered to his account in the Russian social network Odnoklassniki. There were 45 Instagram accounts created on behalf of Japarov or registered in the names of his supporters. From 10 to 70 thousand users are registered on these pages. Famous pop singer Aigerim Rasul kyzy, who has more than 2.3 million followers on Instagram, published hundreds of posts and stories in support of Japarov before and during the events of October 2020. In addition, in the Telegram and WhatsApp messenger apps there are now dozens of groups called ‘Sadyr Japarov’, ‘Sadyr Japarov President’, ‘Support for Japarov’, ‘40 Choro Japarov’, ‘Sadyr Japarov seven regions’. During the recent political events, some of them have become more active, and there is an influx of new users to the newly created groups. Hate speech and trolling through fake accounts have threatened activists, journalists and politicians since the October 2020 events in Kyrgyzstan through online harassment and insults and have attacked them through offensive and offensive comments under their Facebook posts. As a result, the last weeks were marked by targeted mass online attacks on women activists, journalists and politicians.

From civic mobilization to electoral campaigning: The Bir Barbyz initiative and the Reforma party

The pandemic arrived in Kyrgyzstan in the spring of 2020 with the lockdown announced in late March 2020 lasting till May 2020. In terms of deaths, the highest toll occurred in July, just two months before the electoral campaign got under way. The government’s inability to deal adequately with the pandemics led to various civic initiatives with volunteers providing food and medicine to those in need, feeding medical personnel, purchasing safety kits for doctors. One of the biggest initiatives – Biz Barbyz (‘We are here for you’) movement has been doing all of that and much more, and it was one of the many similar initiatives in many locations throughout the country. Biz Barbyz is a vivid and concrete example of how volunteering throughout spring and summer spurred vote mobilization by the Reforma party. In this particular case it was the Reforma party which absorbed most of the active leaders of the volunteering movement who either ended up in their candidates’ list or were its supporters. The critical stance towards the government during the pandemic translated into slogans advocating for the removal of the incumbent elite which was the centerpiece of the Reforma’s campaign. Attempting to defy the old way of mobilizing funds and for the first time in the country’s elections the party secured five mln soms (65 th. USD) electoral deposit through a transparent crowdfunding campaign.

Despite its disappointing electoral performance in the annulled October elections, and later the presidential round in January, Reforma is one of the examples how civic mobilization turned into electoral campaigning. Many volunteers ended up in various parties some which were later at the core of protests over the results of elections. For these parties the focus on the inefficiency of the government during pandemics went hand in hand with the bigger narrative on corruption and the need for renewal.

What do these two examples of voices tell us about civic and political mobilization in Kyrgyzstan? Japarov’s landslide victories in the 10 January 2021 presidential election and constitutional referendum gave him a strong mandate to reshape constitutional order and the distribution of power. The new president has made it clear that decision-making will be centralised, aligning Kyrgyzstan to the more presidential and authoritarian system of governance of its neighbours. In light of this, there is growing concern that the space for voices to be articulated and channelled in the political process will be curtailed and limited.

There are now three impelling challenges for the country and society as a whole: in the short term, the coronavirus and its management, including securing vaccines and protecting the most vulnerable strata of the population; in the medium term, the creeping collapse of social services and the progressive decay of healthcare and domestic economy; and in the long term, the effects of climate change, which are affecting not just Kyrgyzstan but Central Asia as a whole. This is a tall order for any government. It is encouraging that during the pandemic Kyrgyzstani citizens have shown that when a vacuum arises, can-do attitudes translate into collective action and the delivery of key services. Yet, amid the toxic environment on social media; the above mentioned challenges; and the climate of ‘revenge arrests’ that seem to be characterising Japarov’s first weeks in power, Kyrgyzstani citizens will struggle to remain in control of their own fate.

One thought on “Voice(s) during the Covid-19 pandemic: The case of Kyrgyzstan”